Some of the most frequent comments on our YouTube videos of collaborative robots are that they might be too slow for some applications. But we have to ask - does speed always equal productivity?

Previously, while sorting products and packages into pallet loads for warehouse storage and distribution, producers used manual hand stacking. Pallet handling has been a vital logistical function for decades, despite its slowness and high staffing requirements. Pallets are now handled in a significantly different, more efficient, and higher throughput manner to match the heavier loads, faster pace, and larger warehousing requirements.

What Are Palletizer Robots?

In the early 1980s, robotic palletizers were initially developed. These machines use robotic arms with a product gripper, also known as an end effector, to pick up packages from the layer table and place them on the pallet. The automated material handling machine can orient and stack many products or packages into a single load, allowing for product stacking into pallets to be mechanized. Palletizers can also be programmed to depalletize, which is a necessary aspect of some production lines.

Because of their relevance in product handling, robotic palletizers have become commonplace in many warehouses and storage facilities today. They can solve a variety of difficulties that the traditional way could not. Sorting, counting, labeling, wrapping, metal detection, weighing, and other procedures are now being incorporated into the most modern palletizers. These capabilities help businesses save money while streamlining processes for more effective and productive operations.

Although collaborative robots themselves are capable of speeds comparable to many industrial robots, they are commonly operated at a slower pace. Slower moving robots are often safer around humans as well. However, the fastest possible palletizing isn’t always the top priority, nor should it be. 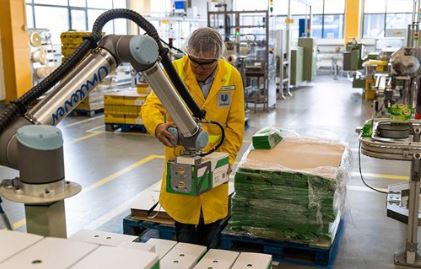 Any industrial process has eight core wastes: transportation, waiting, overproduction, defects, inventory, movement, and excess processing are the first seven. The eighth manufacturing waste is one that is unique to robots - wasting human potential. Palletizing as a job does not make the best use of your employees' abilities. Moving workers away from manual palletizing and into more gratifying, value-added professions is usually considerably more valuable.

Some argue that collaborative robots are inefficient but it’s difficult to say what the cobots are being compared against. A cobot is still faster than a human worker, even at their best. The main advantage of utilizing a robot for palletizing is not that it speeds up the process. Rather, it's about maintaining a consistent palletizing process. For hours on end, the robot can maintain the same speed and quality where a human likely cannot.

When it comes to productivity, it's important to consider not only the palletizer but also the entire system. Traditional machines make pallets quickly, but they are prone to bottlenecks. A jointed-arm robot, on the other hand, can work significantly faster.

In any case, the greatest value of robots is the flexibility they bring to your business. Palletizing cobots, unlike traditional layer palletizers, can readily manage mixed pallets with merchandise of varied sizes and forms. You can almost surely do your selected palletizing task using a cobot as long as the product arrangement on the pallet is secure throughout transit.

A consistently operating palletizing robot is ideal to set the pace for the rest of your operation. Human workers may be inspired to "keep up" with the robot. People were encouraged to modestly increase their own work speed because the robot was not operating at impossible speeds. Because of the robot, they were able to complete their tasks more regularly.

Robotic palletizers may be the industry's game-changer, offering numerous advantages over traditional approaches. However, they will not totally eliminate the traditional palletizing system. The conventional style still wins out if you want a speedier throughput. On top of their versatility and productivity benefit, the robotic system can work on several lines, eliminate several duties, and take up less space. Robotic palletizers are the most cost-effective option if pricing is a primary consideration. If you have various items with varying packaging, such as bottles, drums, and other containers, this is definitely the ideal option.

Contact our collaborative robot specialists today for an assessment of how a robotic palletizing system can work for you.